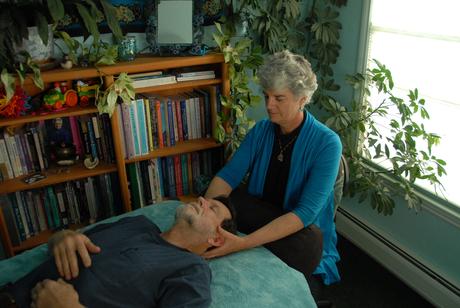 “Work in the cranial field is largely perceptual. The heart of clinical practice is listening. This demands both stillness and humility on the part of the practitioner. In this inquiry all one can do is to enter into stillness and see what our journey brings.”
Franklyn Sills, Craniosacral Biodynamics, Vol. 1, p.3

Biodynamic Craniosacral Therapy is a whole being therapy. By working with the primary forces that originate and develop our systems, BCST therapists support healing at its core level. In modern western culture, craniosacral therapy came out of the practice of Osteopathy and the teachings of Dr. William Garner Sutherland. During his osteopathic schooling at the turn of the 20th century, Dr. Sutherland was struck by the anatomy of the cranial bones and their apparent design for subtle movement. This led him on to a life time of exploration and study of what he termed Primary Respiration. As an osteopath he came from a foundation of perceiving the human system as a connected whole and focusing on balanced movement as the key to health.

Dr. Sutherland defined the craniosacral system as the dura (the connective tissue surrounding the central nervous system), the central nervous system (brain and spinal cord), and the directly connected bony and ligamentous structures. Through his practice, he became aware of subtle movements in the craniosacral system driven by pulsatory rhythmic pressures in the cerebrospinal fluid surrounding and supporting the central nervous system. What he palpated, and many after him have perceived as well, is a gentle tide-like motion ~ that rises and swells toward the cranium (head) and then recedes and pools toward the sacrum (low back) ~ sustaining vital nerve centers. Because the whole body is a fabric of connection, our whole system rises and swells then recedes and narrows with these rhythms.

This Primary Respiration, more central to our existence than even our respiratory breath, is the way that we are breathed into being. Through subtle perceptual skills that we can all develop, Dr. Sutherland listened to and learned from these tides. He became aware of how they enhanced the whole system and how, by bringing his attention to them, his patients got better. He perceived a luminous life force (potency) infused in the cerebrospinal fluid that disseminated to all the fluids and tissues of the body. Modern science has now confirmed that there are light photons in the cerebrospinal fluid.

In the beginning, Dr. Sutherland treated his patients in a biomechanical manner ~ assessing imbalance in the movement of structures and gently manipulating them into place in rhythm with the “cranial rhythmic impulse” (short tide). As he deepened in the work, he began to perceive even slower and more basic rhythms. Over time he found that the potency of the tidal movement within was a more powerful force for healing than any he “could bring from without”. He also discovered the profound regenerative state that would happen when the tides would rest in stillness. Through transformative experiences later in life, he came face-to-face with an alive, intelligent, and aware presence that was infusing/breathing potency into all living systems. He called this The Breath of Life.

Variations of craniosacral work can be found in healing systems throughout the world. Assuredly, this profound approach of working with healing from a knowing of wholeness and connection with larger primary forces has been around as long as there have been people. In current western craniosacral work there have emerged many streams ~ from cranial osteopathy to various forms of craniosacral therapy. They are all helpful and all came out of Dr. Sutherland’s teachings at various stages of his life. Biodynamic Craniosacral Therapy came out of what he shared during the last years of his life when he had come to focus on the energy/potency of the Breath of Life that drives the tides that in turn infuse the the fluids and tissues with health. He was profoundly surrendered to this quantum transmutation of sacred life energy into our core physiological functioning.

BCST is an alive art and therapy that is continuing to evolve. After his passing in 1954, students and colleagues of Dr. Sutherland continued to develop and share the work. In the early part of the 1990’s, Franklyn Sills brought together his many studies including Osteopathy, Polarity, Buddhism, and Pre&Perinatal work to bring forth the current teachings of BCST. He continues to develop and be evolved by the work as do many practitioners around the world, including those of his students who are now teachers themselves.

BCST is a gentle, clothed, hands-on bodywork that works not only with the craniosacral system but also with any other part of the body needing attention. Because BCST works with the underlying causes of disorder by engaging the greater primary intelligence of the system, the positive effects experienced by clients are as varied as the clients themselves. Recipients have gained relief from many issues including structural problems (such as headaches and back pain), injuries, chronic pain, hormonal imbalance, and sleep disorders. In addition, clients report benefits in the areas of trauma recovery, mental struggle, emotional turmoil, and spiritual angst.

The study of BCST begins with a two-year foundation training comprised of a minimum of 50 days of classroom time plus home study. It is a multidisciplinary field including information from anatomy, physiology, fluid dynamics, quantum physics, interpersonal neurobiology, embryology, pre&perinatal psychology, somatic trauma resolution, and more. The classroom time is a balance of lecture, discussion, experiential exercises, and hands-on practice. The home study is a blend of reading, anatomy drawings, short writing assignments, practice sessions & write-ups including a case study, and a self-care "cultivating embodied awareness" project.

The core of practicing this work is the continuing development of subtle perceptual skills based in a deepening ability to settle one’s own nervous system and to rest in resonant relationship. This practice is life changing both personally and professionally. It necessarily demands an open commitment to learning and a surrendering to the mystery of healing. To give and receive this work is to humbly engage with a continually profound and transformational way of being.